The installation/performance happened the 2. 7. 2016 us part of the festival Ana Desetnica 2016 that this year took place in Tovarna Rog too us a way of supporting action.

BLINK BLINK is an installations which purpose was transform the space of the factory in a artificial world made by shiny/multicolour objects hanging from the ceiling and plastic foil closing the space into a semicircle.

To understand the work is necessary to know the background of the space in which the installation was made.
Tovarna Rog is a squat that is a complex of five buildings plus the main building and all of these are constantly housing activities. Rog Factory is filled with cultural, music, sport, social and other activities. Our work is based on autonomy, solidarity and mutual help.
On Monday, 6th of June at 03:15, the security company Valina stormed to Rog Factory in order to secure the place and turn it into a building ground according to the instructions of the mayor of Ljubljana, Zoran Janković. Their goal is to stop the rich abundance of activities held in Rog opposing the capitalist ideas of gentrification of the centre of the town and adjusting it to the tourists and the established art scene. In short, their goal is the eviction of the current users and demolishing of all the buildings except of the main one, which is supposed to be renewed into a new Rog Center.
(for more info check fb page Ohranimo Tovarno Rog or page http://tovarna.org)

The work shows two opposite sides. In one the kitschy space that shows the capitalist idea of "tidy" centre appropriate and likely to the tourists. And on the other side there are the freely movements of the performers that represent the people/users of the factory that aim for alternative ways of creating/working.

The performance was accompanied by lively music that intensify the movement of the performers showing the "fighting" of the users of Tovarna Rog.

The main idea of the work was to show, with the interaction of the viewers, the real support of the people that commonly contribute and support the alternative.

At the end of the performance, the space was full of people, becoming part of the work and transforming into performers/fighter that oppose the opponent. 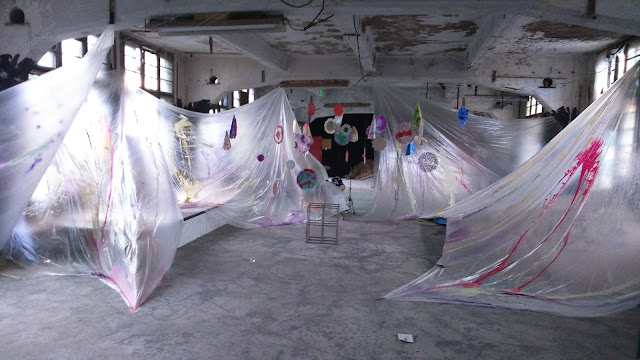 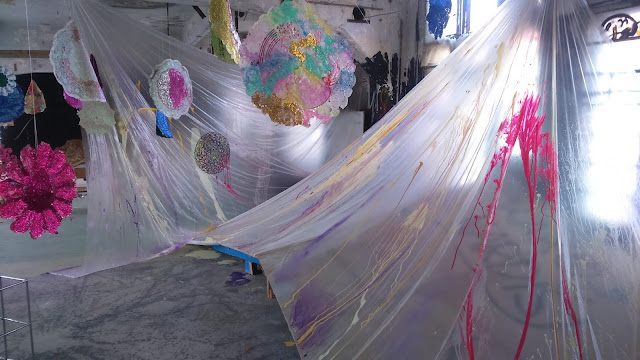 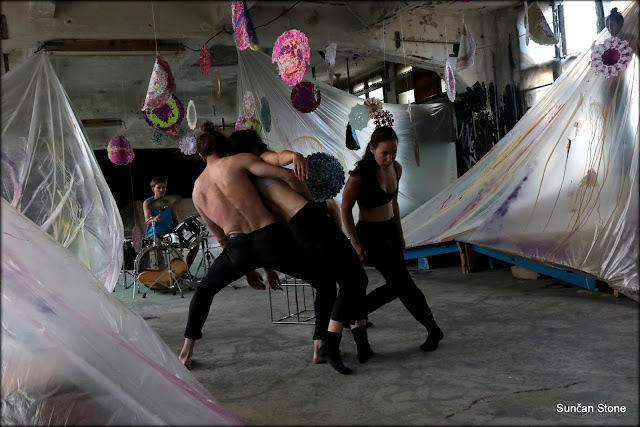 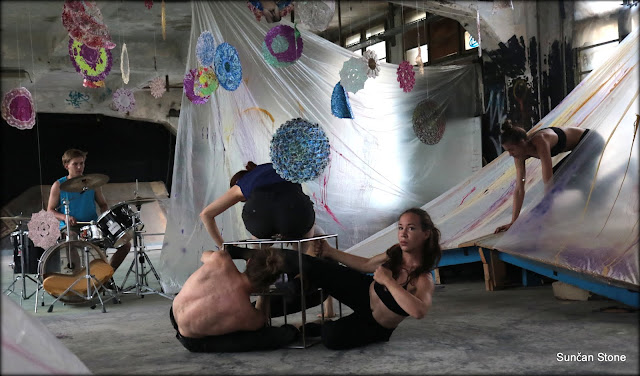 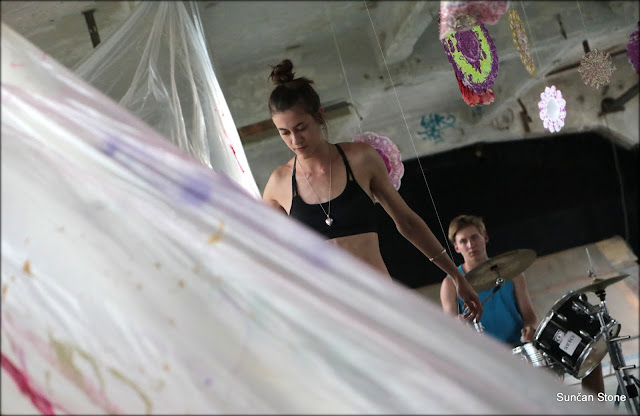 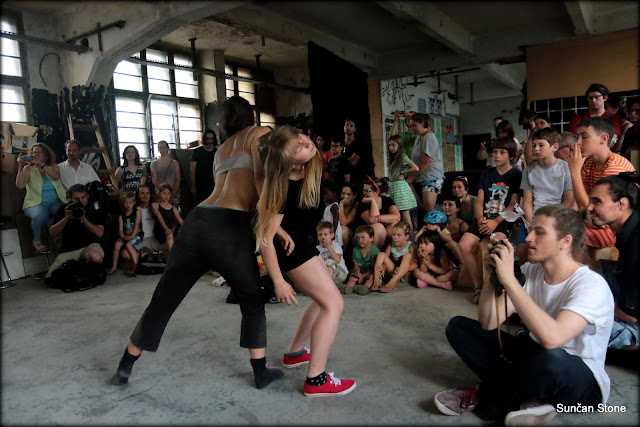 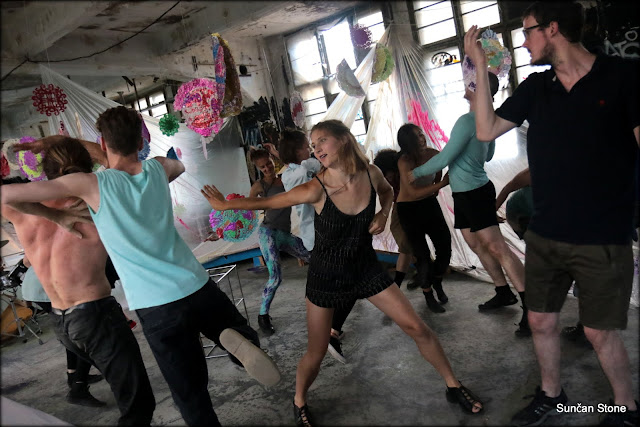 Thanks to every one that interact in the work and help me to realise the project!
Thanks to the photographer Sunčan Stone for amazing photos!

januar 18, 2019
Purification of Integration is a site-specific performance, that is an artistic response to a fatal event / state of mind(in Western world called psychosis), that the author experienced in April 2018. Integration (linking individual parts into a specific whole) has created an unrealistic world of existence and has caused the breaking point in author's life and thus the erasure of identity. Purging integration is a re-launching process, a process that purifies integration and gives a new space for re-linking individual parts into a more "sensible" whole that leads to a life balance. https://vimeo.com/312736145 Project by Kresnička © Copyright 2018 Liza Šimenc and Tatiana Kocmur
1 komentar
Preberite več

Rdeče niti #Where is the line?

junij 11, 2018
TRANSLACIJA | TRASLACIÓN 1.3 RDEČE NITI #Where is the line? An exhibition of the preliminary results of a research project on memories and narratives around performance art events from the past applied to Where is the line? (Franc Purg, Škuc Gallery, December 1998). Translacija | Traslación   is plattform for production, exhibition and research on performance art created by artists Tatiana Kocmur and Francisco Tomsich. Performance art in the sense we understand it here happens in a specific time in a specific place. The main material of the artist is his o her own body, and no documentation can substitute the traces of its presence. For the participants and spectators of a performance, being there and then means a very disctint experience which, in the form o memories and remembrances, constitutes their own bodies and takes the shape of stories, discourses and images. We are interested in how individuals and groups remember, articulate and tell stories about what hap
Objavite komentar
Preberite več

Tatiana Kocmur is a visual artist working in Slovenia.

In 2015 she graduated in the Academy of Fine Arts and Design, in the field of painting with associate professor Žiga Kariž. That same year she had an independent exhibition at the FDV Gallery, Ljubljana. She presented her works at last year's international Floating Castel Festival, the 19th festival Ana Desetnica, at the 5th Biennial of Slovenian Independent Illustrations, at the 21st City of Women Festival and at the DSU group exhibition in Gallery Zelenica in 2016.

She actively collaborates with dance group Medusa with her ambient layouts.

Currently she is working with professional dancer Liza Šimenc which work had been also presented in Berlin.

In addition to her active production of independent projects, in 2017, together with the Austrian artist Florian Berger, she organized a group exhibition in an abandoned premises of the Factory Rižarna as an art project. Also, for the second year, with a group of artists, she is developing a program and organizing monthly exhibitions in autonomous Gallery Zelenica in Avtonomna Tovarna Rog. This year, in collaboration with Uruguayan artist Francisco Tomsich, she is preparing the first cycle of performances TRANSLATION in different venues in Ljubljana and Montevideo.

Her works are manly paintings, installations and ambient layouts based on changing the space and its contents. In the past year, her practice has also shifted to performative art.
tatiana.kocmur@gmail.com